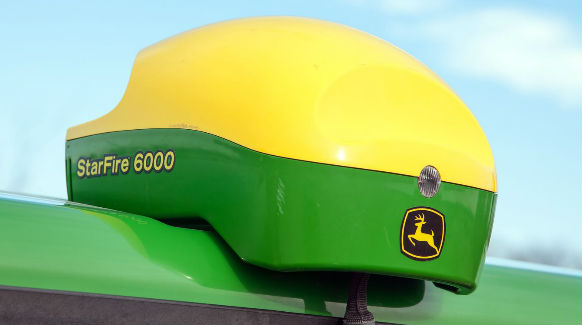 The StarFire™ 6000 Receiver offers improved pull-in performance compared to its predecessor. That means the operator spends less time waiting for the receiver to achieve full accuracy and can get high-precision jobs like planting and nutrient application started even faster. It also means less time waiting to reacquire full accuracy after an extended shading event, such as running next to trees while planting headlands.

Customize accuracy and repeatability to meet the needs of an operation

The StarFire™ 6000 Receiver offers multiple differential correction signal levels to match receiver performance with the needs of the operation.

What does pass-to-pass accuracy really mean for the user?

Pass-to-pass accuracy defines how accurate the receiver is at calculating its position over a relatively short (15-minute) time window. For each point in time during that 15-minute window, a pass-to-pass error value is calculated based on the difference between the desired track spacing at the receiver and the actual track spacing based on the receiver’s calculated position. The error values for the entire 15-minute period are combined and the pass-to-pass accuracy value is defined as the 95 percent confidence interval of the data set, meaning 95 percent of the error values are less than or equal to the specification.

What does repeatability really mean for the operator?

Repeatability defines how accurately the receiver can calculate its position over a relatively long time window. Repeatability is measured at the receiver and does not take into account additional error sources such as AutoTrac control system error, ground conditions, or implement drift.

In-season repeatability is critical when using AutoTrac for multiple jobs throughout the growing season. One example would be creating AutoTrac guidance lines during planting, then using those same guidance lines to complete subsequent jobs such as side-dressing fertilizer, post-emerge spraying, and harvesting.

Long-term repeatability is critical when mapping interior and exterior boundaries for later use as input to John Deere Section Control on planters, sprayers, and fertilizer applicators. Long-term repeatability is also critical for growers that use the same AutoTrac guidance lines over multiple seasons for operations like subsurface-drip irrigation, controlled traffic, or alternating planter spacing between the rows from a previous season.

The StarFire™ 6000 Receiver has 252 channels and tracks both GPS (United States) and GLONASS (Russia) satellites. Tracking as many GNSS satellite signals as possible increases the chances of retaining accuracy and performance in challenging areas such as when operating near trees.

With the StarFire 6000, the user gets improved performance and uptime when operating precision agriculture systems like AutoTrac™ assisted steering system and Section Control in challenging areas when compared to the previous StarFire 3000.