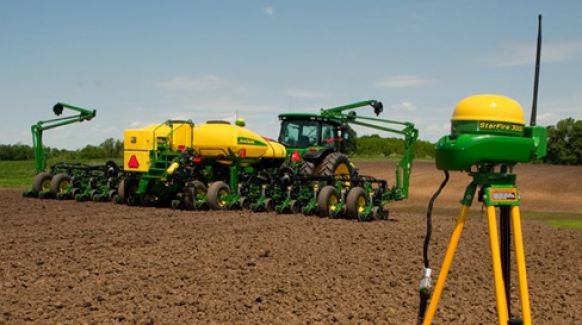 More than one repeater can be used with one base station, but the repeater cannot receive signal from each other in a daisy-chain configuration. In order to operate, a repeater must be connected to a 12-V power source.

A repeater is the same as the radio that is on a machine or base station receiver.

A repeater consists of the following:

Base stations using John Deere RTK Radio 900 are very easy to set up for several reasons:

The John Deere RTK Radio 900 operates in the 902-MHz to 928-MHz frequency range. This range does not require a license from the U.S. Federal Communications Commission (FCC), so the base station can be set up anywhere as long as it does not broadcast more than 4 W of power.

For more information on FCC regulations of the 902-MHz to 928-MHz range, visit www.fcc.gov or talk to a local John Deere dealer.

A John Deere RTK Radio 900 base station can be used in a mobile setup or mounted permanently to a building, concrete silo, or radio tower. Depending on the operation, either type of mounting can be used:

More than 200 John Deere dealers across the United States and Canada have set up a large, robust RTK network. This is beneficial for several reasons: